After nearly 10 years of life and after a few repairs, my home’s GE Triton dishwasher died last week. 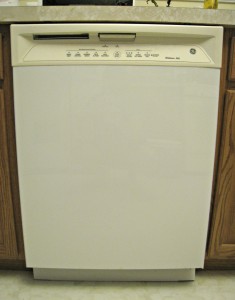 My home’s former GE Triton dishwasher, which lasted nine-plus years, with some repairs.

During its lifespan, the GE dishwasher was OK, but not great. We had to have a new control panel installed a few years ago when the panel stopped working properly. Plus, the dishwasher has always been loud – very loud. No matter where I was in the house, I could tell when the dishwasher cycle started from the high-decibel sound it made. Because our kitchen is just off our family room, I usually put the machine on delay cycle so I wouldn’t disturb my family while they were watching TV in the evening.

I called in a GE repairman when my old GE dishwasher stopped draining, and water started leaking out of the dishwasher door. When the repairman told me that a repair would cost over $300, I decided to ditch the old machine and get a new one instead.

Unfortunately, it cost me about $100 just to get the bad news from the GE repairman.

As soon as the repairman left, I logged onto Consumer Reports to get Consumer Reports’ dishwasher reviews and recommendations. My husband and I settled on the No. 1 rated Bosch Ascenta dishwasher from Lowe’s, which we were able to get on sale for just under $540. We opted to have the store install the machine for us, for just over $200.

Lowe’s sent out a contractor from Moore’s Plumbing and Heating from New Egypt, NJ , this morning. The contractor was very courteous, arrived on time, and even gave me time to clean the floor under the counter (where the old machine had been) before putting the new machine in. He also tested the machine before leaving, and gave me a quick description of how the controls on the dishwasher work. 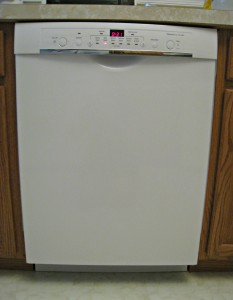 My kitchen’s new Bosch Ascenta diswasher from Lowe’s. So far, the dishwasher has been quiet and has a handy to display to let me know when the dishes will be ready.

I’ve only had my new dishwasher for an hour now, but so far, it’s working well. (Fingers crossed.) Because of Bosch’s Noise Reduction System, I actually have to strain to hear the dishwasher over the TV. Plus, I like how the display tells me how many minutes are left in the cycle – my first cycle in the new dishwasher should be clean in about 25 minutes, according to the display. The stainless-steel tub within the dishwasher is also a plus, and is a step above my old machine’s white plastic one.

So Far So Good

The Bosch dishwasher seems to have less space in it for dishes than did my old GE machine, but I am sure that the dishwasher, which is Energy Star rated and has the Good Housekeeping seal of approval, is more energy efficient than my old dishwasher. It’s probably not as easy to break too – but if it does, it’s super easy to find dishwasher parts on the internet, with sites like http://www.partselect.com and others available. The yearly estimated operating cost for the machine is $30 when an electric water heater is used. (So, if I have to run more loads, it might be OK.) Plus, the adjustable tines on the dishwasher racks (that can be flipped down according to what space is needed), might help with getting more dishes and pots into the machine.