One rainy day a few days ago, my daughters and I broke out the “Growing Gardens” Kiwi Crate that we received in the mail. My kids had a wonderful time!

In the crate was enough craft supplies for my kids to create two adorable craft flowers each out of paper cut outs and pipe cleaners. The craft was simple enough that my girls (both 9) were able to create their flowers completely on their own, without any guidance from me. After they made their flowers, they used the colored clay that comes with the kit to decorate the four Kiwi Crate cardboard pots. I was impressed with the pretty designs that my daughters created on the pots with their clay! (One daughter even made tiny smiley faces for her pot.) 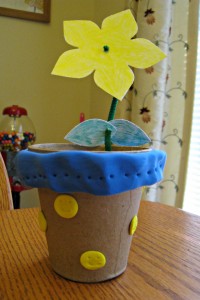 I was so happy to have that crate, because with the rain pouring outside, the kids were getting bored before I pulled out the crate. But once I gave them the crate and got them busy working on their crafts in the kitchen, I had some free time to do some work on my own. 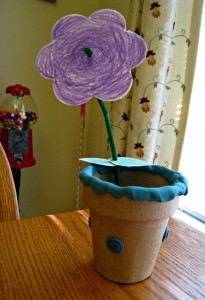 Another of my daughters’ Kiwi Crate creations.

My daughters even had enough clay after decorating the crafts to come up with some crafty and fun creations of their own. I’ll have to share some of those creations in a future post! 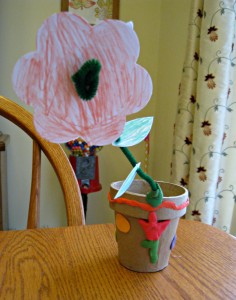 A Kiwi Crate flower and pot crafted by my daughters 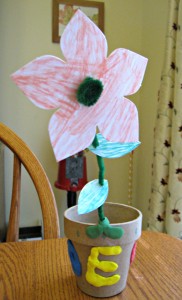 A Kiwi Crate flower made by one of my daughters