This post contains Amazon affiliate links. These links cost you nothing and may earn me a small commission that helps to fund this blog. Thanks! 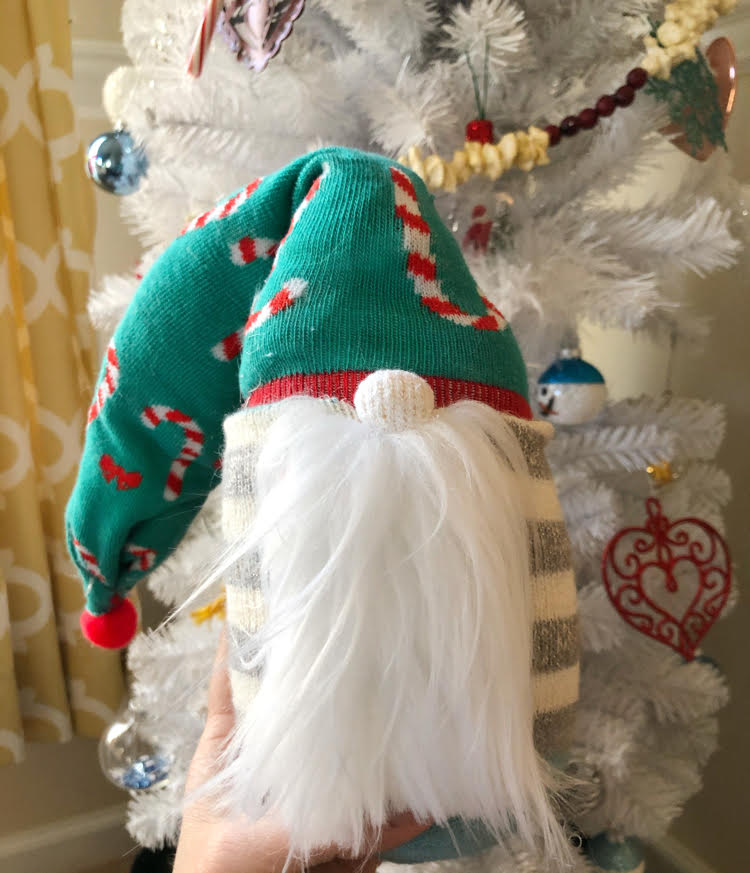 Happy holidays, everyone! I meant to get this post published before Christmas, but the holidays snuck up on my this year! I decided to still share today’s holiday tutorial post anyway. I am super into gnomes this year. They are quite popular these days but I don’t know if they will still be trendy next Christmas!

I love gnomes, so when I spotted easy DIY tutorials on Pinterest on how to craft sock gnomes, I had to go for it! (You might remember that I made DIY wood slice gnome ornaments earlier this year.) I made a sock gnome for myself, and then I made one for each of my two daughters! After that, I crafted a few sock gnomes as Christmas gifts! 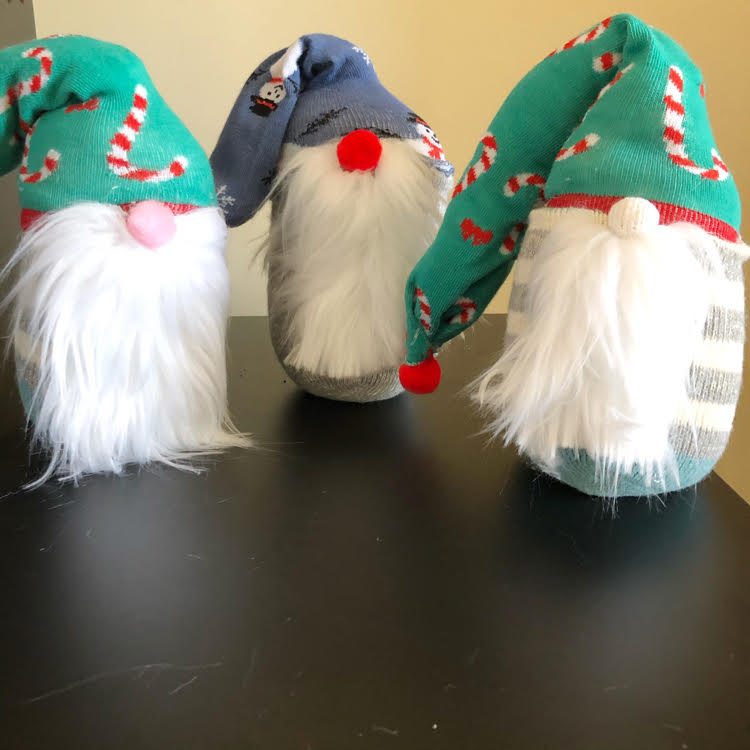 2-3 socks per gnome (one for the head and one for the body. If you like, you can use one as the base to hold the rice.)

(I use a Mason Ball Jelly Jar

to store my elastics in.)

Rice (or Poly-fil and glass gems from the dollar store)

For my first sock gnome, I took a white tube sock and filled it with rice. (I found that an easy way to fill the sock is to fill a mason jar with rice and then pour it into the sock.) Before using the rice, I froze it for a week so nothing will hatch from the rice later!

To fill a sock with rice, I simply fit the sock tightly over a rice-filled mason jar and then turned the jar upside down so the rice spills into the sock. 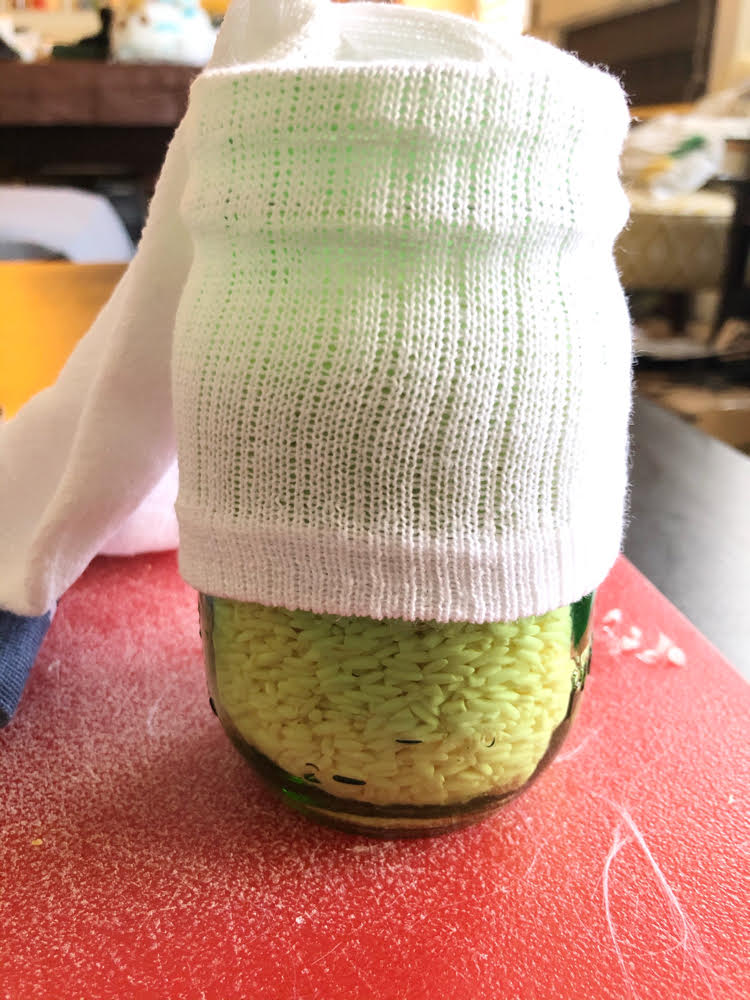 I used a small elastic (from the dollar store) to twist closed the rice-filled sock. I added a bit of hot glue within the sock at the top) to help seal the sock closed. 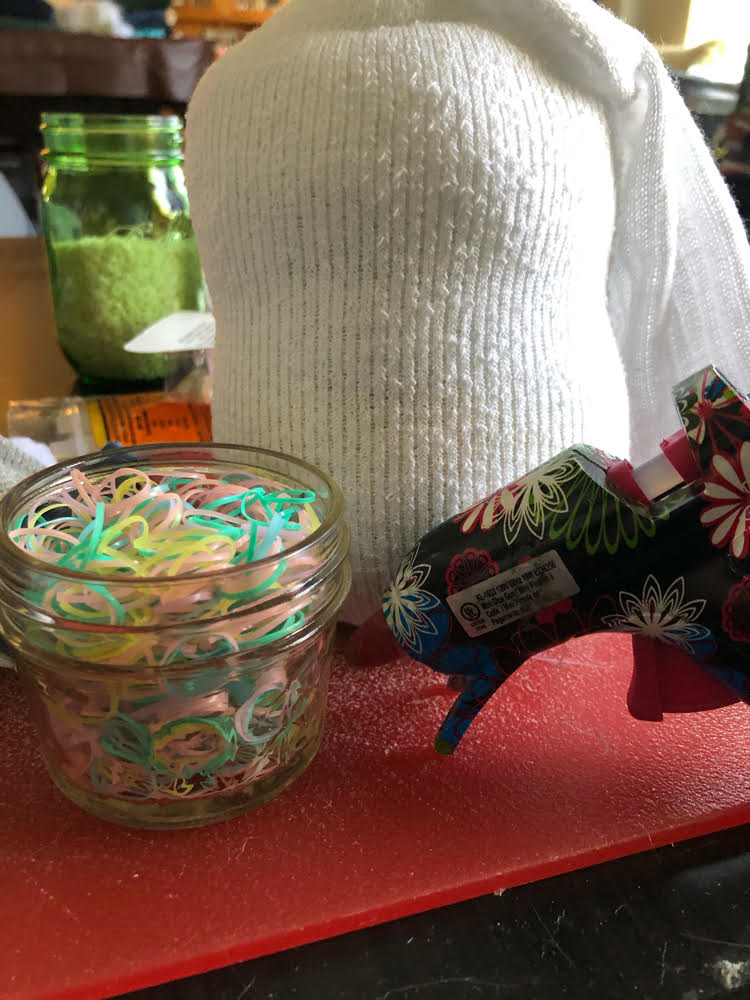 After I had a sock filled with rice and secured at the top with a little hot glue and a hair elastic, I fit a sock onto the bottom of the body of the sock gnome. I pulled the new decorative sock onto the rice-filled sock almost all the way to the top and cut off the extra bit of the new sock.

I then rolled the top of the new sock down (to have a clean edge) and hot glued it into place. 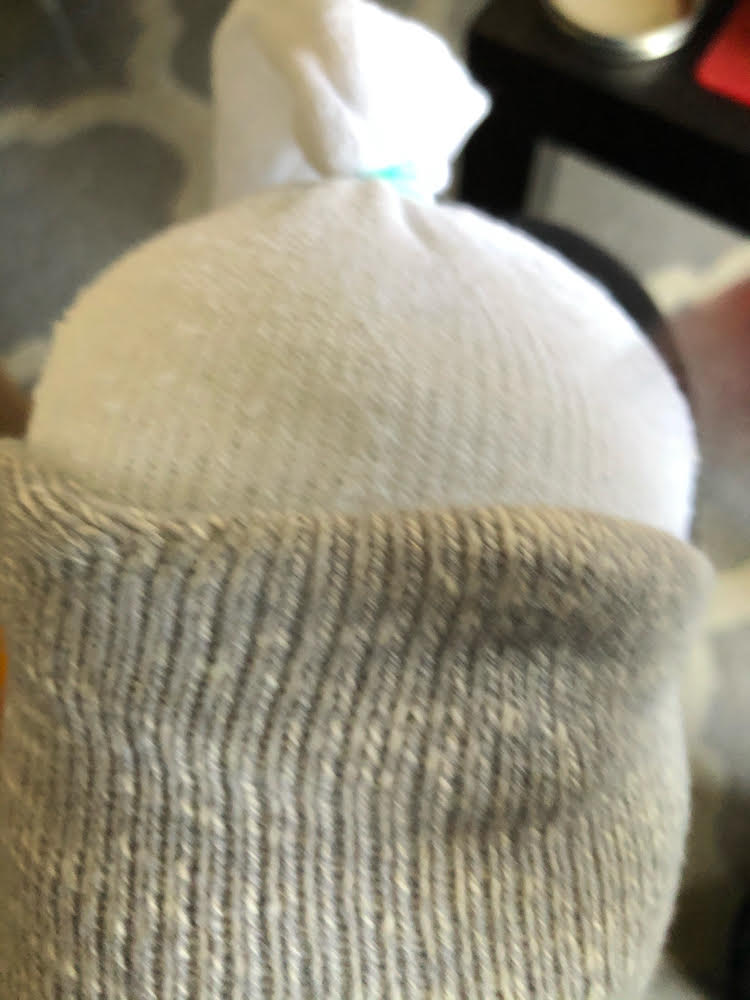 For my first sock gnome, I twisted a small amount of the rice-filled gnome to make a nose and secured it with one of the hair elastics. (You can see a gnome with one of the those noses below.) 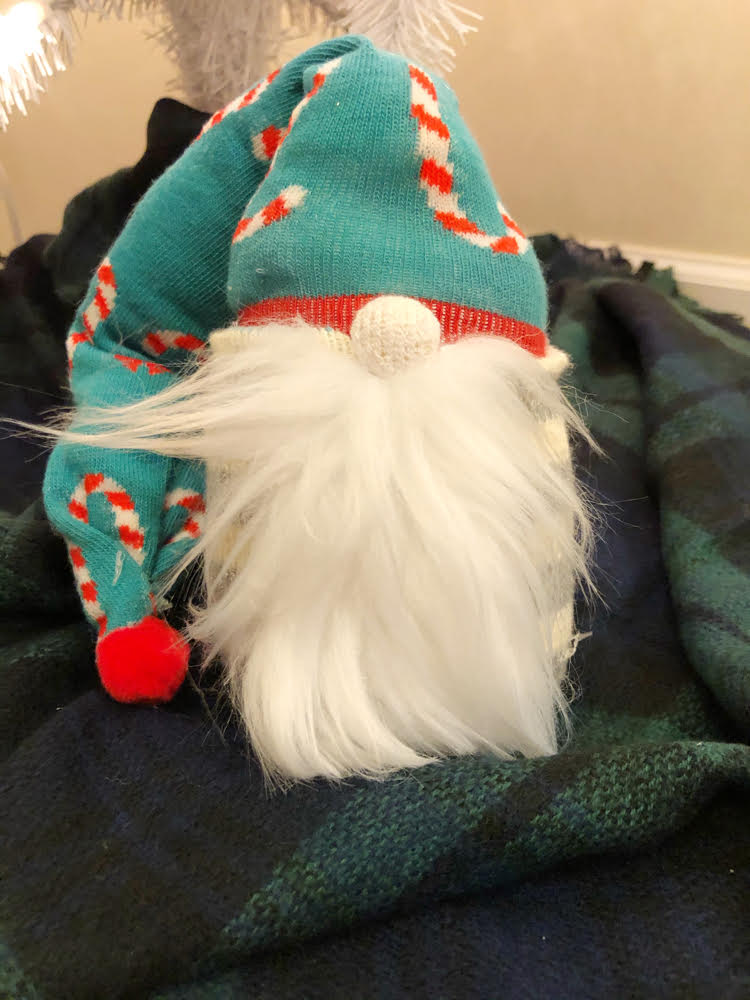 With my next sock gnomes, I used cute mini pom moms (that I found in the craft section of Walmart) as noses – I got them in white, pink and red. I simply hot glued a mini pom pom onto each gnome to serve as a nose. 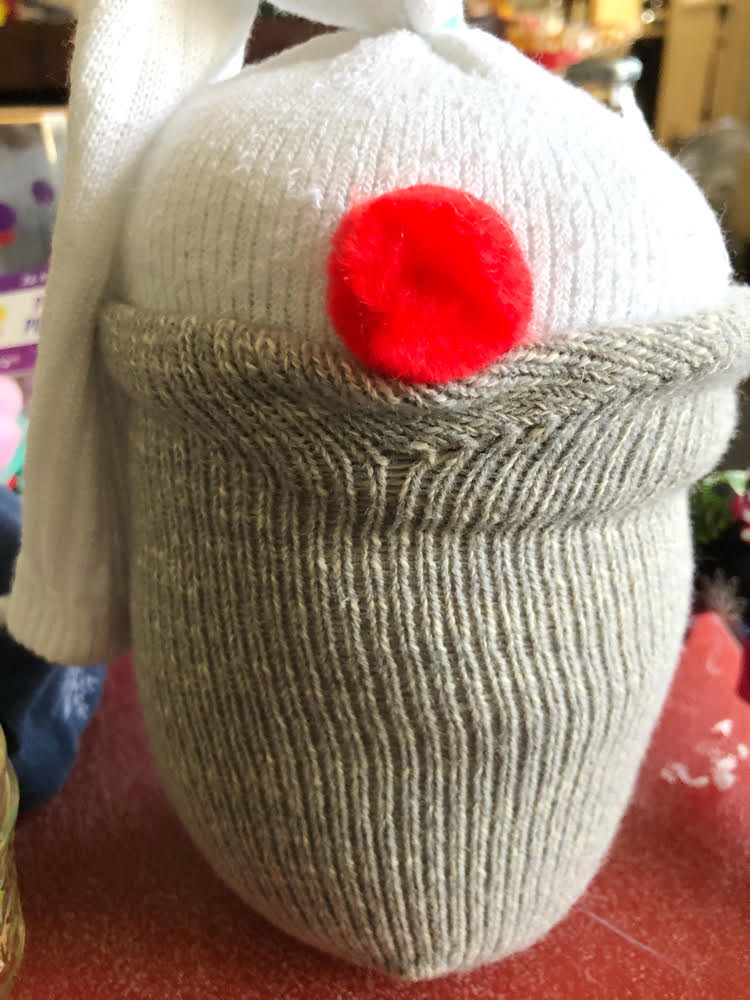 Some people cut the top part of the body sock (i.e., the white tube sock for my first gnomes) off when making gnomes. I keep my socks intact – I found it helpful to stuff my “hat” for the gnome with the top of the sock and a little pit of Poly-fil to fill out the hat.

Once I had the body of the sock gnome completed, I chose a sock for the hat. For my first gnomes I used a whole sock for the hat. For  some of my next gnomes, I cut off the socks off at the ankle. (To close the sock, I turned it inside out and knotted it and then turned it right sound out.) Some socks have the heals marked off with a color, and that doesn’t look so great on a hat.(So I cut off those heels.)

I topped each gnome’s hat with a pom pom at the tip.

I found it quite easy to craft these sock gnomes — one night I made three of them in just an hour! 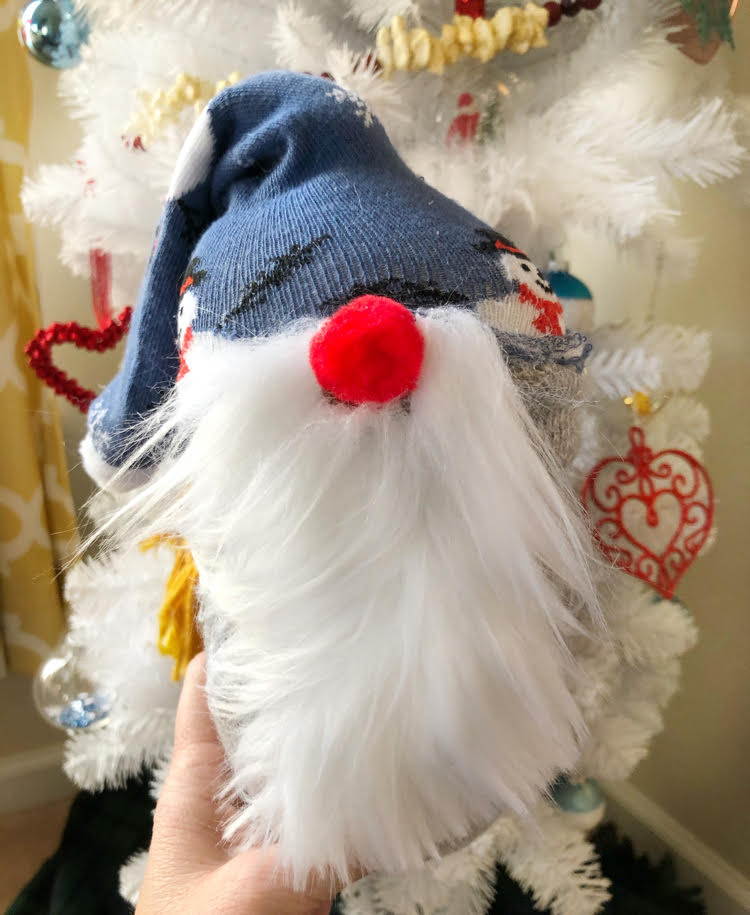 I made my second batch of sock gnomes a little bit differently than the others. I stopped using an extra white sock to hold the rice. (I just used one decorative e sock for the body, and one for the hat.) I ran out of frozen rice, so I used a few glass gems from the dollar store to weight the gnomes and some Poly-fil to fill out the bodies of the gnomes.

Each method has its pluses — the sock gnomes made mostly out of rice have a nice shape and stand more easily. Meanwhile, I like the softness of the sock gnomes that are mostly filled with Poly-fil.

I hot glued some wooden decorative elements to some of my gnomes’ hats for a fun look. 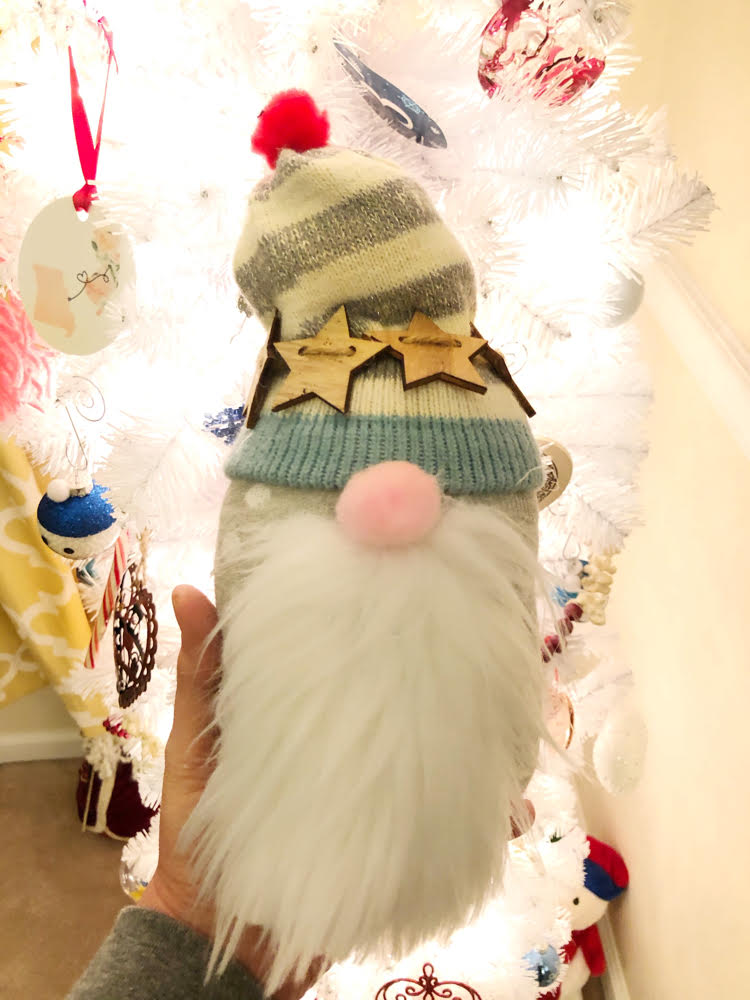 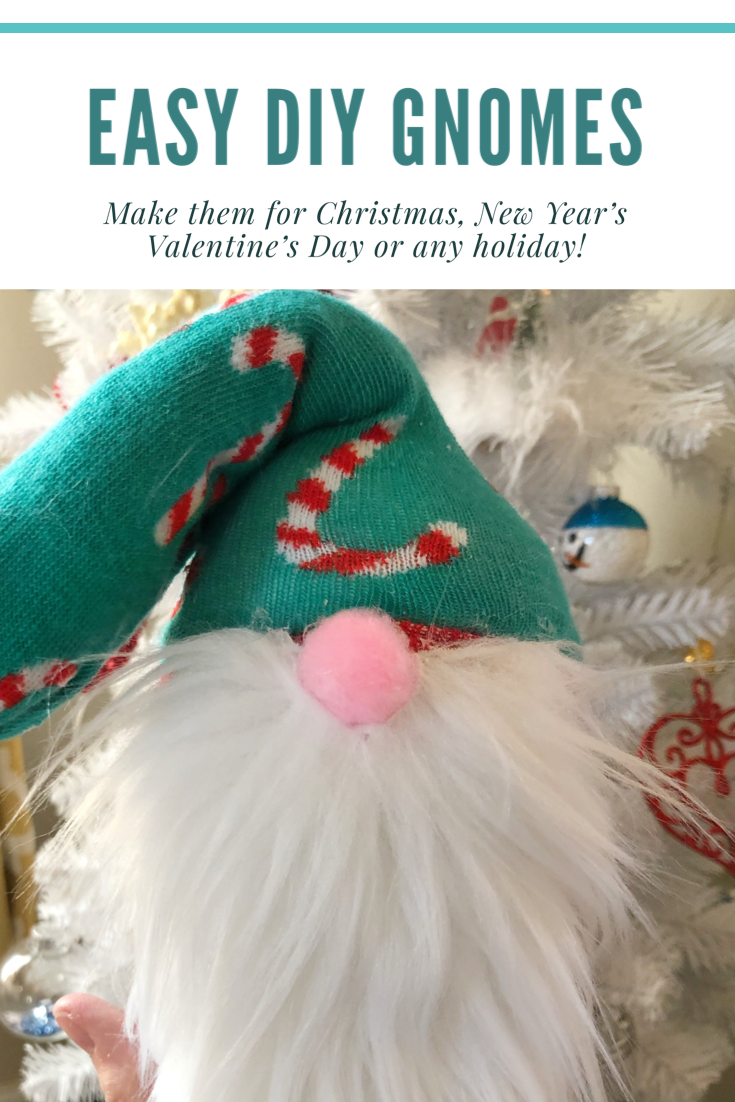