I’ve been wanting a holiday garden flag for my home’s frontyard garden for a while now, but haven’t wanted to spend much on it — garden flags that I love often cost $10 or more, and I can’t bring myself to spend that much money on such a small decoratiave item. 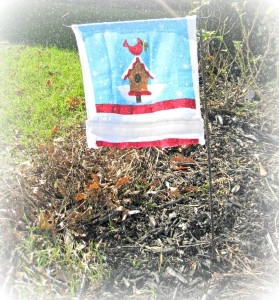 My homemade holiday garden flag, crafted from a $1 dish towel.

So the other day, when I spotted a cute dishtowel with a cute blue and red winter cardinal print, I bought it to use as the material for a homemade Christmas garden flag.

To craft the DIY garden flag, I only used one side of the towel, since the towel repeats the same print on the front and back, but with the print flipped (upside down) on the back. To lengthen the flag, I cut an extra piece of non-printed towel from the back. I then sewed that portion onto the bottom of the towel. I  pinned a pocket across the top length of the flag and sewed it, so there would be a pocket to slide in the horizontal rod (for holding the flag) on my flag stand.

I think the end result looks cute, and it only cost me $1! At some point this winter, I might try to craft a more complicated/decorative flag, but I think this flag will serve its purpose for now. (I have too much Christmas shopping and gift wrapping to do!)